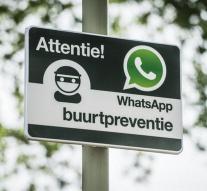 - Monitoring the area through WhatsApp is more popular than ever. Almost half a million Dutchmen are members of special WhatsApp groups, which communicate on suspicious situations and people in their neighborhood. That's what the initiators of the nationwide platform say, 'WhatsApp Neighborhood Prevention' against One Today.

The platform was established two years ago. 'It did not seem to exist at all,' says founder Stephanie Nap. Together with Jan Niessen, she now manages the national site and a dedicated Facebook group of administrators. People who want to start their own group can join them and be considered as the official neighborhood app.

The initiators acknowledge that there are still 'childhood diseases.' For example, Poland in Brabant was systematically discriminated against, and prevented neighbors from sharing dirty pictures.