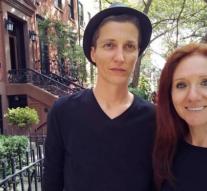 amsterdam - A Dutch / Belgian couple will marry 22 times in one year.

The women Fleur Pierets and the Dutch Julian Boom are going to do that in all countries of the world where a same-sex marriage is legal.

The two have been a couple for seven years. The artists, currently living in New York, want to make a photo and video show of the 'wedding world trip'.

October 2018 must be all marriages. The first wedding cake will be cut to New York next month.

Then the Netherlands follows and the line ends in New Zealand. In the meanwhile there have also been a number of countries that have legalized the gay marriage: Malta, Germany, and then Australia.