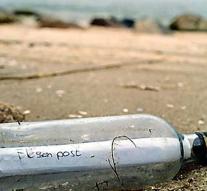 perth - A couple from Perth, Australia, found the oldest known bottle post during a beach walk on the west coast. The 132-year-old message was in a bottle from the Schiedam-based jeneverstoker Daniel Visser \u0026 amp; Sons.

The bottle contained a form stating that on June 12, 1886, 950 kilometers from the Australian west coast, he was thrown into the sea from the German sailing ship Paula, which was on its way from Cardiff to Makassar. Between 1864 and 1933, German captains thrown thousands of bottles overboard as part of a survey of sea currents, say researchers from the Western Australian Museum, who announced the discovery. Vinders was asked to contact a German consulate or the maritime observatory in Hamburg.

German scientists have established the authenticity of the message by comparing the handwriting and the data with the Paula ship log. The former oldest bottle post is 108 years old.