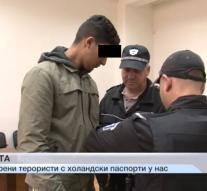 - Three Dutch suspected of terrorism and travel to its IS- area arraigned in Bulgaria to court.

The trio was maintained in Bulgaria after the Netherlands had submitted a request for international arrest . The Bulgarian TV channel BTV made ​​images of their visit to the court.

The custody where the three are in has been extended by the court . The Bulgarian public prosecutor would be one of the three, Elias H. "a great danger to society" and he would have previously tried to smuggle a bomb to Syria. According to the Dutch police have another suspect , Younes A. 'close contact' with recruiters in both Europe and Syria.

According to the trio would BTV before the arrest "without problems" a few days spent in the Bulgaargse capital Sofia.