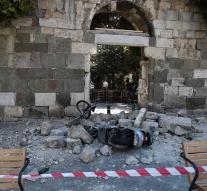 - Among Dutch tourists in Kos, some wounds have fallen due to the earthquake. According to the travel agencies, this is limited to scratches and broken limbs.

For example, a TUI customer has a broken arm and a Sunweb customer a broken foot. As far as is known, there are no serious wounds among the Dutch.

The latest news, detailed eyewitness reports, photos and videos about the earthquake are read here.

Only in Kos city are three hotels so damaged that tourists are not allowed to go out for the sake of prudence for the time being. For them, alternatives are sought, otherwise they will get their money back.

This does not apply to people who fear, because there is no negative travel advice. All travel agencies settle down to book them to another destination, but cancel free of charge is not included.