Home / World / Dutch firm in Chile due to ecstasy 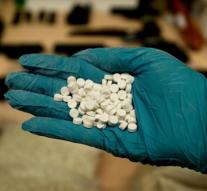 rancagua - Chilean police in 'Operation Holland 'in their own words one of the largest ecstasy seizures made. Two Dutch are thereby arrested in the capital Santiago. They are suspicious of them to sit behind the smuggling of ecstasy to Chile and have to sell the drugs, local media reported this weekend.

When the action is three kilos of high quality ecstasy seized. It would have been enough for 21 000 units with a possible value of the equivalent of more than 400 000. The investigation into the ecstasy gang was done in Rancagua, 100 kilometers south of Santiago. The two Dutch suspects have been brought there and detained.