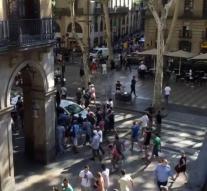 - For the Dutch Lyanne Bolhuis who lives at the Ramblas, it was a big scare. Exactly at the time of the attack, her friend usually returns from his job. By stupid coincidence, he was somewhat delayed and derailed from the attack.

'From my house I look forward to the part of the Ramblas where it happened', says the Dutch. 'I was just at home and shut the windows. But at one point I heard noise. Then I went looking and saw people running. They all went shopping. Soon the police were everywhere. They have deposited all the streets. If you want to watch the balcony, you are told to go back in. '

While the Spanish media talked about the first dead, Bolhuis called with her friend. Fortunately he picked up and could not tell him anything. 'I asked him to stay where he is,' she says relieved and shocked at the same time. 'There are now about thirteen deaths spoken by the media here. Very very fierce. '