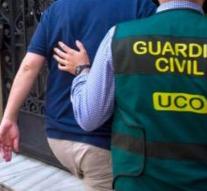 malaga - The Spanish police arrested a Dutchman for large-scale drug trafficking in the south of the country. The 34-year-old man from Roosendaal, who lives in Benalmadena near Malaga, has been searched for a while by the Belgian authorities. The man would play an important role in an organization that smuggles drugs through the port of Antwerp, Spanish media reported on Monday by police.

The Dutchman could eventually be arrested in his house in Benalmadena. He tried to mislead the police by showing a Estonian identity card, but soon revealed his true identity. He was arrested on the basis of a European arrest warrant issued by the Belgian judiciary.

The gang is suspected to have smashed at least 2200 kilos of cocaine and 1100 kilograms of heroin between November 2011 and July 2013. Both parties were seized.

In 2011, several gang members were arrested when a container containing 176 kilograms of cocaine was found. The Dutchman would also belong to the arbitrators. It is not known how he came under his punishment at that time.