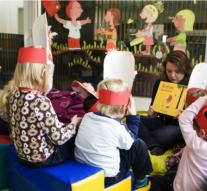 - Three quarters of Dutch children under three years received care in 2014. Thus the parents were in the Netherlands, leading in Europe. It reports the Central Bureau of Statistics (CBS) on Monday.

Yet Dutch children spent a few hours in daycare. This is because in countries made extensive use of child work part-time more often.