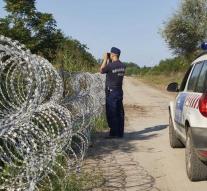 - "In the Serbian capital Belgrade Friday a Dutch woman arrested on suspicion of terrorist activities."

"According to a Serbian newspaper the woman was five months pregnant."