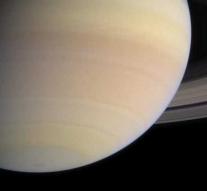 houston - On Titan, one of the moons of Saturn, enormous dust storms have been seen. Until now they had only been observed on the earth and on Mars.

The dust storms probably originate from dunes on the Titan equator. If the particles are big enough, they come down again. Some storms disappear after 11 or 11, but there are also storms that last five weeks, according to the European space agency ESA.

The storms were discovered by the spacecraft Cassini. It passed on Saturn last year, but in its existence gathered so much information that scientists are still busy digging out the mountain data.

Titan, discovered in 1655 by Christiaan Huygens, is currently the only place outside the earth that is sure that there are liquids on the surface. Therefore, traces of extraterrestrial life may be found in the form of minute organisms. The only difference is that Titan is not about water, but about liquid methane. It is also the only moon in our solar system with an atmosphere. European explorer Huygens landed on Titan in 2005.