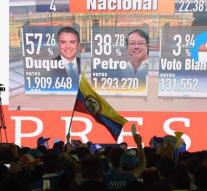 The center-right Duque becomes the successor of the current president Juan Manuel Santos. The winner of the Nobel Peace Prize in 2016 was not allowed to stand for re-election after two terms of office. Santos received the Nobel Prize for his efforts to reach a peace agreement with the left-wing guerrilla movement FARC.

Duque, candidate of the right-wing party PDC, wants to amend the peace treaty on essential points. He thinks that too many concessions have been made to the FARC in the agreement. He states that former FARC leaders must be prosecuted for war crimes.