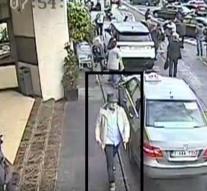 - Two men from Birmingham were sentenced Tuesday to finance international terrorism. Possibly they have contributed to the attacks in Paris and Brussels.

The court in London have Boufassil Zakaria Mohammed Ali Ahmed and thousands of euros to the Belgian terrorist Mohamed Abrini, which became known after the attack in Brussels as 'the man with the hat.'

The 31-year-old Abrini left the airport after the attacks at Brussels Airport in March without his explosives had detonated. The Belgian was also involved in the attacks in November last year in Paris, where the French prosecutor has asked for his extradition. He must stand trial for membership of a terrorist organization and the 132 terrorist murders in the French capital.