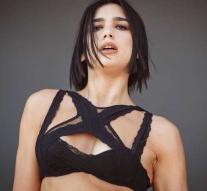 - Dua Lipa reacted visibly when fans were brutally removed from the hall during her concert in Shanghai.

They were put on the streets because they reportedly stood, danced or waved LGBT flags, reports the BBC. On social media, several videos have surfaced showing how some fans are pulled off their seats.

This did not escape the singer herself, although she did not explicitly mention it. 'I want this to be a safe environment where we can all have fun. That we can all dance and sing and have a nice evening ', said Dua Lipa almost in tears.

This is the first time Dua Lipa has performed in China. A spokesperson for her record company did not want to respond to the incident.