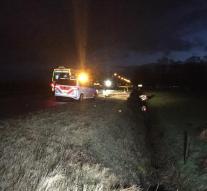 heerhugowaard - Heerhugowaard Saturday was a car in the water along the Donkereweg. The police saw no one in the neighborhood and went to see the owner. That proved a nineteen year old boy from Heerhugowaard which intoxication was sleeping out. He had nine times the permitted amount of alcohol.

He was pretty drunk and his clothes covered with mud. The boy had just a few months his license, but he's lost since Saturday. It is not yet clear how the car is landed exactly in the water.