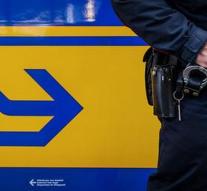 roosendaal - A 26-year-old man from Antwerp was arrested Sunday at the train station of Roosendaal, after he had assaulted two guards of the Dutch Railways. Police reported Monday that traveled from Antwerp in a drunken state and without a valid ticket on the train from Rotterdam to Roosendaal.

After verification by the conductor from Antwerp under the supervision of security guards had to leave the train. The man struggled, and the guards kicked several times. When one of the guards, he pulled a strand of hair from the head.