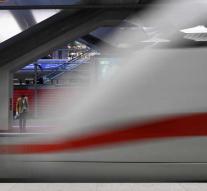 berlin - A drunk passenger managed to work with a fire extinguisher in the cabin of the train driver of a train in Germany on Sunday. The man wanted Deutsche's high-speed line...

On Sunday morning, during the ride from Frankfurt to Paris, the 30-year-old man from Heidelberg was arrested.

Witnesses have told police that the man pulled the fire extinguisher off the wall, broke a glass door, and the shocked driver reported that he 'went way too fast' and 'had to save the passengers.'

None of the passengers were injured in the incident, the train was removed from the timetable.