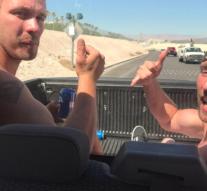 - A 28-year-old Brit is the first person to swim across the water at the iconic Hoover Dam. Hundreds of other people did not survive a dip in the water.

Arron Hughes, a forklift driver from Wales, was for a bachelorette party in Las Vegas. 'We drank more than enough beer and wanted to see the Hoover Dam, but it was so hot, the car was like an oven,' the Brit told Mail Online (photos).

He decided to take a dip in the dam of the dam on the border of Arizona and Nevada, but did not realize that it was a life-threatening action. 'I just wanted to get into the water, I thought' you only live once, 'and decided to swim across the street. 'Really easy did not. 'The water pushes you to the side, so you have to swim hard and can not stop. '

Agents were stunned when the man returned alive. 'They just said they could not believe it. I did not know at all that it was not allowed, there were no signs to see. 'Hughes has received a receipt of over three hundred dollars. 'I was the first person ever to survive the crossing and therefore did not receive a custody sentence. '\n  \n   \n    \n    \n   \n   \n   \n      \n   \n     Photo: AP

The Brit had a lot of luck: nine out of ten turbines in the construction were out. The water of a high-rise lake flows down, after which normally the turbines cause electricity to be generated. This provides Las Vegas with water and electricity.

Over the last decade, 275 people died after a dive into the 'dangerous' water.