Home / World / Drugs tunnel between Mexico and US discovered 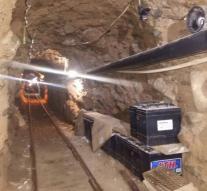 - Police have between Mexico and the United States discovered a 800 meter long tunnel used to smuggle drugs. At the border, were subsequently arrested sixteen smugglers and is approximately ten tons of marijuana seized.

The underground passageway ran between the Mexican Tijuana to the US city of San Diego. The arrested suspects are part of the Jalisco Nueva Generación cartel, which works with the Sinaloa cartel of escaped drug lord Joaquin " El Chapo " Guzmán. Who disappeared about three months via a tunnel from a heavily guarded prison.