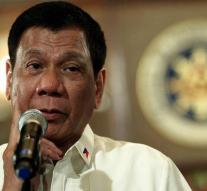 - Since the arrival of Rodrigo Duterte as president, a huge number of alleged drug traffickers killed in the Philippines. According to local media died over the last eight weeks, 465 dealers by actions of third parties, and that there were between January and June 68.

During his election campaign promised to Duterte will conduct an uncompromising fight against crime. A group of Filipino lawyers hit earlier alarm about the actions of the police since he was elected president.

Duterte claimed previously as mayor of Davao City already have a zero tolerance policy. He denies having anything to do with death squads who are drug dealers, criminals and gang members cleared out of the way.