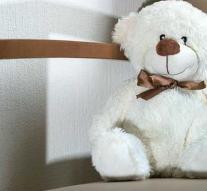 ghent - An Albanian couple was in court on Monday morning in the Belgian city of Ghent due to the years of cocaine dealing. In a house search last year, agents made a remarkable discovery. Ten grams of uncut cocaine were hidden in the plush bear of their 2-year-old daughter. The duo rises to thirty months in prison.

The police tracked the two after statements from several 'customers' of the couple. 'I was sure my daughter could never get to that bear, he was high on the cupboard,' said the girl's father. 'Those drugs were hidden in the bear, because I thought the police would not search among the children's toys. '

'So we are with a mother who allows drugs between her daughter's toys to be hidden to keep it away from the police and who also sells drugs herself,' the judge remarked.

In addition to prison sentences, the public prosecutor also requests that 130,000 euros be forfeited. That money would then have to surrender the couple.

On 14 May the judge makes a decision.