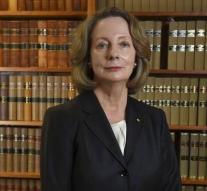 canberra - At fifteen, she decided to quit school prematurely. Now the Australian Susan Kiefel (62), the highest court in her country. The lawyer was Tuesday officially appointed as chief justice, 'President of the Australian Supreme Court. She is the first woman to perform the duties.

Prime Minister Malcolm Turnbull, who announced the appointment, praised her 'inspiring life story. 'Kiefel decided at its fifteenth that she wanted to be independent. She went to work as a receptionist at a law firm. Eventually she decided in high school anyway to finish by taking part-time licenses. She earned her degree in 1975, after an evening study, after which they climbed higher and higher up the legal ladder.

'In retrospect, it's pretty easy to tell how you can have a satisfying working life,' she once said in a speech. 'But as simple as it is not like you're not there yet. '