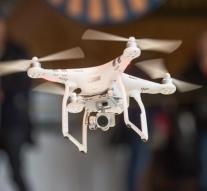 london - An unknown person tried drones to smuggle drugs and phones on the walls of a prison in London. Two unmanned aircraft were intercepted by guards. The one that controlled the aircraft has not been arrested yet, the London police reported Monday.

Agents saw on Saturday, August 13 that a man acting suspiciously near the prison. When he saw the officers, he ran away quickly. He dropped two bags. There were drugs and mobile phones. He managed to escape. A day later, police saw a drone over the prison. The plane crashed. Later that day, a second drone was intercepted.