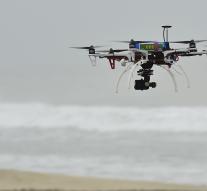 strasbourg - Drones should have a built-in chip in the future. That should make it easier to recover damages makes such unmanned aircraft chunks.

The European Parliament vote in Strasbourg on Thursday with a proposal to this effect to EU parliamentarian Matthijs van Miltenburg (D66). " You could see it as a license plate ", according to Van Miltenburg. " The chip and registration are not very expensive and well avoid a lot of hassle in an accident. "

There are now hardly any European rules on drones. " If we do nothing then arrange the drone in one country outlawed and in the other it flies caught in a web of unnecessary regulations. " D66 also wants to see European accredited training for " driver " come from drones.