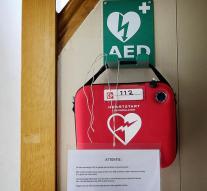 stockholm - A drone who brings a defibrillator to a cardiac arrest is much faster than traditional emergency services, such as an ambulance. Tests have shown that a drone is an average of 16 minutes faster on a distance of approximately 3 kilometers. This increases the chance of survival.

The medical university Karolinska Institute in Stockholm conducted the tests in the Swedish capital. A cardiac arrest is one of the most important causes of death, literally every second. Every minute after a cardiac arrest passes, the chance of survival decreases by 10 percent. That chance is reduced to about zero after about 12 minutes, according to the Journal of the American Medical Association on Tuesday.

In Sweden, a drone has been developed that puts a defibrillator on site. This easy-to-use device can trigger a patient's heart again by means of an electrical shock.