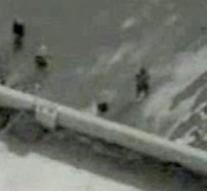 london - A drone pilot appears to have avoided a public IS overscutie with a spectacular action.

The action was taken when the British army saw drill images at 3000km distance that in the Syrian village of Abu Kamal hundreds of residents were driven together by the terrorists. Two trucked prisoners were unloaded from a truck, apparently for a public execution.

The drone pilots operating from England saw an IS sniper on a roof overlooking the execution site. It was laid down for the purpose of escaping civilians who wanted to escape the execution. With a precision bomb the man finished. Due to the panic that occurred after the weft, execution could be prevented.

The images were released last night by the British Ministry of Defense.