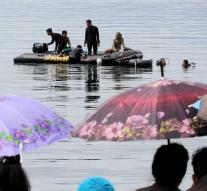 jakarta - The Indonesian rescue service has found human remains in Lake Toba using underwater drones. The remains are probably from passengers of the ferry that sank there eleven days ago.

The 17-meter-long wooden ferry boat capsized during a storm and sunk in the approximately 450-meter-deep lake on the island of Sumatra. At least 190 people are still missing. Three bodies have been salvaged. Eighteen people survived the disaster, including the captain.

The video footage recorded by a remote submarine showed human remains, motorcycles and ropes of the ferry at a depth of 450 meters.

'After finding these objects, the next task is to investigate how the bodies must be recovered', said the Chief of the National Rescue Service.