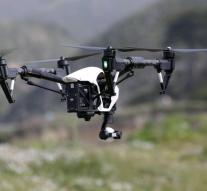 london - British drone owners must register their drones in the future and take a safety exam. The new rules will apply to owners with a drone who weighs heavier than 250 grams, reports the BBC.

It is not yet known when the new rules enter and how they are maintained. The Ministry of Transport continues to work on the details of the bill. The intention is that drone owners follow a course and test a qualification demonstrating that they know British rules on aviation safety. For example, it should not be flown near airports and prisons.

'With these measures, we give priority to the protection of the population, while maximizing the potential of drones,' said the Minister of Aviation Martin Callanan. 'Drones are increasingly vital for inspections of road infrastructure, for example, and are important and life-saving tools for police and firefighters in search and rescue operations. But as with any technology, abuse is on the verge. By registering and informing users during a security course, we can reduce unintentional violations in the airspace, 'said the British minister.

Drone manufacturer DJI is in favor of the new regulations. 'The fact is that there are multiple users of airspace, but you need to develop a system so that everyone can fly safely,' said the spokesman for the dronemaker. 'In these matters, it is a gold middleway. Dropping out drones would be unreasonable, but flying without rules is that too. We are delighted that the British Government recognizes the value of drones and is looking for acceptable solutions. '