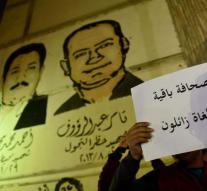 - The chairman and two members of the Egyptian union of journalists Saturday sentenced to two years each in prison. They were found guilty of hiding colleagues who were wanted by the authorities and spreading false information.

'We three have been tried, but the real target is the entire league,' said chairman Yehia Qalash. The three were released pending appeal on bail. The trade union leaders were arrested in May after police had raided the union building to arrest two journalists who had sought refuge there.

Dozens of journalists and trade unionists gathered in front of the building of the League in Cairo to protest against the verdict. Riot police stood on nearby streets with armored vehicles ready to intervene. Amnesty International spoke of a 'new stage in limiting the media and freedom of expression. '