Home / World / 'Drivers did not go aside after buscrash' 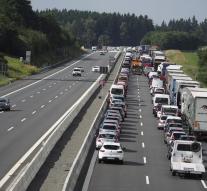 munchberg - After the heavy accident Monday morning on a German highway, the Bavarian Interior Minister Joachim Herrmann has strongly criticized the behavior of some motorists after the accident. He called their behavior 'irresponsible.' By the accident, eighteen died and thirty people were injured.

'Many car drivers in the file after the accident have prevented the rescue operation or make it difficult for emergency services to quickly get to the scene of the accident. It was almost impossible for larger vehicles to pass the file, 'Herrmann said.

According to the minister, emergency services were ten minutes after the accident. 'The fire in the bus was so heavy that the rescue services could not do anything for the people who were still in the wreckage. '

It can be seen from the picture that there is hardly any left over of the charred wreckage of the bus. How fire has taken place so quickly is still being investigated. The emergency services were told by German media that it was a light head-tail collision.

Two injured injuries are still in danger on Monday afternoon. Eleven people have been identified from the eighteen dead so far. Due to the severity of the fire, identification is difficult. Most of the bus passengers were people aged sixty and older who were traveling to a holiday destination in Italy.