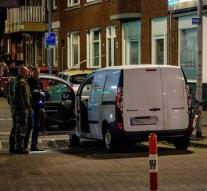 rotterdam - The driver of the Spanish van was arrested on Wednesday evening in the vicinity of the Maassilo in Rotterdam, released. Police investigation indicates that the gas bottles he had in his possession were not related to the terrorist threat in the city. He is not a suspect anymore.

The man was picked up as he rode back and forth with the Maassilo. There was just a pop concert released after information had come about a possible terrorist threat.

The man fell on his driving style. He turned out to be drunk. He also transported gas cylinders. Later he appeared to be a mechanic and needed the bottles for his work.