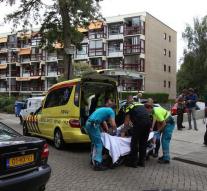 amersfoort - An employee of Pluim Elektronica was hit on Thursday afternoon after being overtaken by his own van. The man was severely injured. He was brought to the hospital with urgency.

The mechanic was working on a barrier at the Burgemeester de Widtstraat and had parked his van in a slope. Due to an unknown cause, the bus was rolling and the mechanic was overtaken.

The man's van was stopping against a parked car. A trauma helicopter came on the spot. The police have started an investigation.