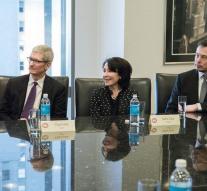 redwood shores - George A. Polisner departs at Oracle, where he is a high driver. He is angry because CEO Safra Catz cooperates with the upcoming presidential Donald Trump.

Polisner has put his resignation letter on LinkedIn. He writes that Trump breaks down social services, hatred and inciting violence against minorities and has no respect for soldiers, women and the disabled. Trump also is bad according to him, the environment, education and the economy.

Catz is in the group that prepares the change of power in the White House, the 'transition team'. ' I want to let Trump know that we are on his side and that we help him wherever we can, '' she said last week. That shot Polisner down the wrong way. ' I'm not on the side of Trump and I'm not here to help him. If his policy violates the Constitution, criminal and morally wrong, I'm even here him to oppose in every lawful way, '' Polisner writes.

Polisner worked for Oracle since 1993. He led the cloud division.