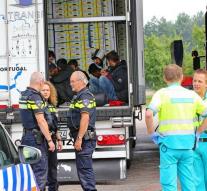 blade - The police discovered eleven refugees in a truck on the A67 on Saturday, including two children.

They sat between a load of mangoes and told they came from Iran and Iraq. The Portuguese driver, according to a police officer with the truck, was on his way to Britain.

In Belgium, near the Dutch border, a Belgian motorist signaled that he had seen something suspicious. The driver then drove his truck to a petrol station at Bladel.

The driver, the truckers and the truck were escorted to the police station in Eindhoven. There the Aliens Police question the driver and refugees.

The police want to know, among other things, how the refugees got into the cargo space and whether they actually come from Iran and Iraq.