Home / World / 'Driver clocked off and leave passengers behind' 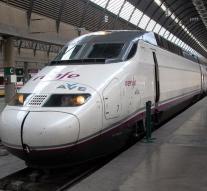 - "A Spanish driver has left a high-speed train full of passengers to their fate because his service was over. Railway company RENFE has launched an investigation, but according to the unions was the driver in his right."

"The train was en route from Santander to Madrid on Tuesday, but stopped halfway stop. The driver allowed according to Spanish media that he could no longer drive train and more than a hundred travelers had to save himself further. He then went home."

"According to the trade union of railway staff kept the operator simply follow the rules and he could not do otherwise. RENFE would have failed to arrange replacement."