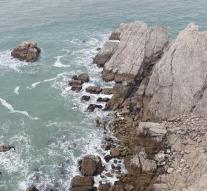 seoul - South Korea is going to repatriate a North Korean repatriator who was mistakenly in his boat on the Yellow Sea last week and crossed the border. The man of the thirties was picked out of the sea on Sunday at Daecheongdo border island.

According to the South Korean press office Yonhap, it is a fisherman who collected cocktails. He has indicated that he wants to go back to North Korea. The man is likely to be transferred to the village of Panmunjon on Friday, so the Department of Unification knows.