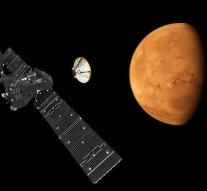 darmstadt - Europe is on the verge of another big mission in space. In a few days will be a satellite in orbit around the planet Mars. Which allows a device to gently loosen the surface should countries, and to measure its environment. It all happens at 172.2 million kilometers from the Earth.

The arrival is also a preparation for the second part of the mission. Around 2020, a European explorer on Mars and drive around. Europe leads the mission with Russia. In a world with Syria, Ukraine, MH17, economic sanctions, doping suspensions and cyber espionage space is one of the few areas where Russia and the West still work together.

The project is called ExoMars. The probe was launched in March this year. The first part, the satellite is the Trace Gas Orbiter. Which should measure the gases there are in the atmosphere of Mars. The device delves mainly into methane, a gas that can indicate minor forms of life. The satellite is on Wednesday in orbit around Mars.

A few days earlier, on Sunday, the satellite let loose his passenger, the lander Schiaparelli. Which falls towards the surface. On Wednesday, he comes with a speed of 21 000 kilometers per hour within the atmosphere of Mars. He has 121 kilometers and less than six minutes to slow down for landing. This is done with the friction of the air and the use of a parachute. Six minutes later he will have to gently flops on the surface.

The landing is in the first place intended to test the technology. That can help in planning next travel to Mars, including the next scout. But Schiaparelli also has a few days to energy research. As it measures wind speed, air pressure, temperature and humidity around him.