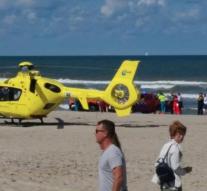 the hague - A man who was taken out of the sea by the rescue brigade on Sunday at Kijkduin beach in The Hague has died yet. It is a German. He leaves one woman and two children behind. That's what the police reports.

The man was taken unconsciously from the sea and was rested on the beach and then taken to a hospital. There he died.

On the Hague beach, several people encountered a troubled sea on Sunday and Monday.