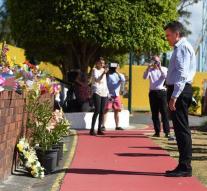 coomera - The Dreamworld theme park in Australia is December 10 again open to the public. On 25 October, four visitors to the theme park to life in an accident on a lazy river.

The owner of Dreamworld, Ardent Leisure Group, said this Wednesday in a statement. The park and the nearby White Water World are closed since the fatal accident on the Thunder River Rapids.

Something went wrong with one of the round boats. Two people were thrown out and two others got stuck in the attraction, which uses a conveyor belt.

Dreamworld is located in Coomera place, in Brisbane on Australia's east coast and is the largest amusement park in Australia. The whitewater Thunder River Rapids is suitable for visitors from two years and is described by Dreamworld as 'moderately exciting. On the track, which also has a free fall, rates reached up to 45 kilometers per hour.