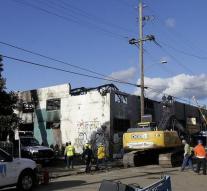 oakland - Fatal fire in the US Oakland last weekend 36 people were killed, may have originated in a faulty refrigerator. Police reported Tuesday local media that fire spores point this out. Also, witnesses have seen flames coming from the refrigerator.

The investigation meanwhile continues and the sheriff warned to quick conclusions about the fire. Which broke out while in the building, a converted warehouse with studios for artists, a dance party was underway. It seems that the fire left much to be desired.

Former residents of the former warehouse, which bears the name Ghost Ship, have said they have complained often about dangerous situations. So would doors and stairs are often blocked by mountains of waste.