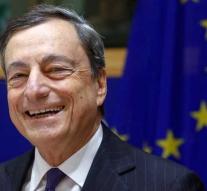 - The euro is gaining momentum against the dollar to above $ 1.25, the highest level since December 2014 after positive comments from ECB president Mario Draghi on economic development in the eurozone and the expectation that inflation will pick up in the long term.

According to Draghi, the rise of the euro in recent months is partly explained by the ongoing economic recovery within the euro countries. He also points out that the mobility of the euro is encouraged by 'the increased sensitivity of the market to the so-called changes in our communication.

Draghi further emphasized that the ECB can not continue to pull the cart on its own and to reform countries more to make the economy more stable.

Although it is moving in the right direction with the economy in the euro zone, Draghi continues to insist that inflation is lagging behind and that monetary stimulation will continue.

The unchanged refinancing rate of the ECB at 0% has not been adjusted since the last operation in March 2016. The deposit rate of-0.4% has also remained unchanged for almost two years.

DFT follows the explanation of Draghi via a LIVEBLOG.

In October last year, the central bank announced that it would phase out its sizeable support policy with effect from this year. The ECB has halved the amount pumped monthly through its buying program in the eurozone economy to € 30 billion. Low interest rates and the buying-up of debt paper are the ECB's resources in the fight against low inflation in the euro zone. With their purchase program, the central bankers in Frankfurt will at least continue until the end of September 2018.