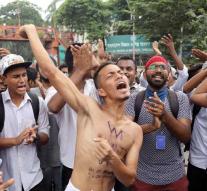 dhaka - Dozens of students have been injured in protests in Bangladesh. The students have been protesting for seven days because of the poor road safety in the country. The immediate cause was the death of two students; they were hit by a speeding bus last week.

The protests got out of hand in the southwest of the capital Dhaka. According to witnesses, the police used rubber bullets and tear gas, so that dozens of young people were injured. Different media speak of an absolute chaos. Thousands of students would be on their feet.

Every year 20,000 people die in traffic in Bangladesh, the WHO reports.