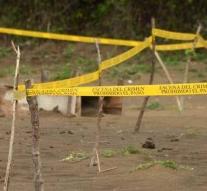 mexico - The skulls of 47 people were found in graves in the Mexican state of Veracruz. It happened at about 10 kilometers from the city Alvarado, reported the attorney general of the state Sunday (local time).

The eight tombs with skulls and other body parts were located near each other. Researchers found included the remains of three family members who were missing since September 2016.

A few days ago a mass grave has been discovered in Veracruz with 250 skulls. That morbid discovery was made by Mexicans who had gone in search of missing family members, because they were tired of the inaction of the authorities.

The graves are possible victims of drug offenders. Criminal gangs fight in the state to lucrative transit routes for drugs and migrants.