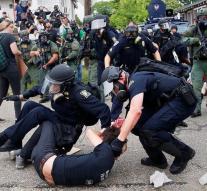 - Police in the US city of Baton Rouge on Sunday (local time) again arrested dozens of demonstrators. That happened after the authorities announced non-violent protests against police brutality more tolerable.

It's been all weekend is agitated the capital of Louisiana. Police arrested Saturday night and Sunday morning, 102 people. These included activists who refused to leave a major thoroughfare.


Also in the city of Saint Paul (Minnesota) were protests this weekend out of hand. Angry activists pelted police with petrol bombs, bottles and stones. Over a hundred people were arrested.