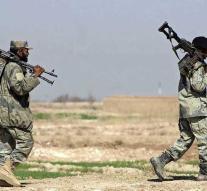 kabul - In the event of various attacks by the Islamic terrorist organization Taliban in the Afghan provinces of Farjab, Helmand and Kandahar, at least 27 people were killed this weekend.

The most serious attack was according to the authorities in Farjab. At least 22 people were killed there on Sunday during attacks on three police controls and a small military base. Fourteen people were injured, some seriously. The Taliban has also kidnapped four soldiers.