Home / World / Dozens of people are killed by explosion in Kabul 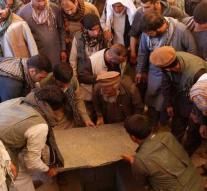 kabul - A heavy explosion has cost the lives of dozens of people in the Afghan capital Kabul. Government officials say a suicide bomber was blowing up during a religious meeting.

The Interior Ministry speaks of at least fifty deaths and seventy wounded. The Islamic victims, according to a spokesman, had gathered in a hall to reflect on the birthday of the Prophet Muhammad, the most holy prophet in Islam.

Responsibility for terrorist violence has not yet been claimed. The Afghan capital has repeatedly been the scene of bloody attacks in recent years.