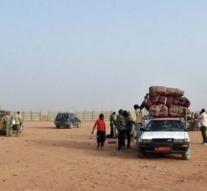 niamey - Over 90 immigrants were rescued after being left behind by human traffickers in the Sahara. Soldiers and a team of the International Organization for Migration (IOM) met them in the desert on Friday in Niger, said the head of the IOM mission in the country Wednesday.

One of the predominantly Nigerian migrants died shortly after arriving in an IOM complex in the town of Dirkou. The survivors are eventually brought back to their home country. African migrants who try to reach Europe often travel through Niger. It is unknown how many people do not survive the desert journey.

Earlier this month, 44 more migrants came to life in the desert in Niger. The truck with which they traveled through the Sahara would have gotten bad luck. IOM teams still search for 25 others who have probably lost their way in the desert.