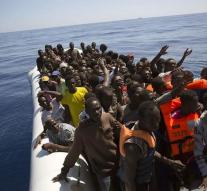 madrid - The Spanish Coast Guard fears that about fifty migrants have drowned for the Moroccan coast. Rescue services picked up three 'exhausted and disoriented' men of a half-sunken boat drifting around the island of Alborán, told the BBC on Tuesday. The other suspects are presumably killed.

The vessel with the men drove according to the coast guard for days. The boat was supposedly leaving a far greater number of passengers from Morocco. The three African men were transferred to a hospital in southern Spain. Rescue workers are still looking for possible drenches or bodies.