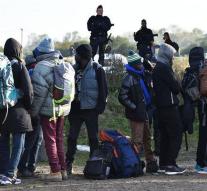 - In the refugee camp 'the Jungle' in Calais still staying more than one hundred refugees and migrants. According to the French authorities, the camp was completely cleared but according NIS correspondent Frank Renout are right outside the camp, dozens of people. That NOS reported on its website.

France began on Monday with the evacuation of 'the Jungle'. More than 6,000 former residents were registered and bused to shelter places throughout France. Earlier, it appeared that about a hundred unaccompanied children have been left behind because they could not get more register.

Besides the laggards are also still new refugees who are looking for the evacuated camp. ' Like many of the stragglers they want to travel from Calais to the UK, 'said Renaut.