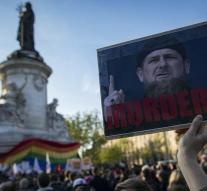 moscow - The Russian newspaper, Novaja Gazeta, made the names of 27 young men arrested in Chechnya without charge on Monday and killed in prison on 25 January 26th. The newspaper, which is critical of the Kremlin, relies on high-ranking sources with the authorities in the southern part of the country.

According to Novaja Gazeta, gays are concerned. The newspaper has been writing about the imprisonment and abuse of homosexuals in Chechnya in recent months. A spokesman for the government in Grozny said that there are no gays in Chechnya. And if they are, they are killed by their family.

Kremlin spokesman Dmitri Peskov said he had taken note of the latest announcement. He did not want to react because the sources raised were anonymous. Russian Human Rights Commissioner Tatjana Moskalkova said to the authorities to have asked the people whose names have now been announced. According to the Novaja Gazeta, the authorities are in a hurry with the investigation.